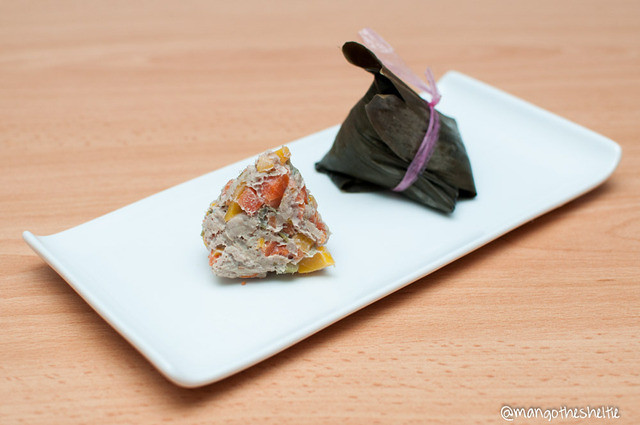 The festival now occurs on the 5th day of the 5th month of the traditional lunar calendar, the source of its alternative name, the Double Fifth Festival.

The story best known in modern China holds that the festival commemorates the death of the poet and minister Qu Yuan (c. 340–278 BC) of the ancient state of Chu during the Warring States period of the Zhou Dynasty. A cadet member of the Chu royal house, Qu served in high offices. However, when the king decided to ally with the increasingly powerful state of Qin, Qu was banished for opposing the alliance and even accused of treason. During his exile, Qu Yuan wrote a great deal of poetry. Twenty-eight years later, Qin captured Ying, the Chu capital. In despair, Qu Yuan committed suicide by drowning himself in the Miluo River.

I’ve been toying with the idea of making some for Mango and the cats (if they would deem it worthy enough to eat) for awhile now, so….. yeah. Also, since we make our own dumplings in our household, why not make some for the pets?

Rice dumplings (or zongzi) are made with glutinous rice stuffed with a filling, wrapped in a bamboo leaf. In my home, we use meat + mushrooms + chestnuts as fillings (using my grandma’s secret recipe).

Ingredients for doggy dumplings are grain free and actually just based on Mango’s normal homecooked food. Just dressed it up in a bamboo leaf!

Cooked! Dumplings for the pets! Hehe. No rice inside though 😅😅